As for this week, it has been very good, but not as much success as last week. A lot of our appointments fell through, but it's okay, because in many ways those instances opened up other opportunities!

On Tuesday, we had our regular standing appointment with a less active family, the Hemmings. While planning for it, Elder Benedict and I wanted something that would help them unite, as they are all very independent and sometimes stubborn! We decided to prepare a lesson on prayer. We found scriptures to do with prayer and family. Then, I had an idea for an activity: we would all kneel in prayer and take turns praying for everyone in the room out loud. The idea was to open up a channel of love and  caring between them all bolstered by the Holy Ghost. And boy, did it work! The lesson went very well; Elder Benedict and I taught powerfully, effectively, and equally. Paige, their rebellious teenage daughter, asked about patriarchal blessings, which opened up a wonderful discussion. When it came to the prayer activity, Paige initially tried to retreat into her bedroom, but we were able to coax her out. I tell you, the room was on fire! When it came to Paige, she was just quiet for about 30 seconds...and then she started! She said a wonderful prayer and I know she felt the Spirit. She even came to church with the rest of the family yesterday!! So awesome!

We worked super hard on Wednesday. From teaching Derek to failed appointments to seeking inspiration in what-next's to biking really fast with plenty of street contacting in between! We spent an entire eight and a half hours away from our apartment. Feeels good! Of course, we rewarded ourselves with ice cream when we finally got in. Elder Benedict is learning really, really well how to recognize and act on promptings of the Spirit. All the time, I hear, "Elder, I really just feel like we should go talk to that person," or "Elder, we need to visit this family. I know it." And every time, something amazing comes of it!

Derek committed to us on Saturday that after church, he was not going to smoke a single cigarette for an entire week. Knowing Derek, he doesn't make us promises that he doesn't intend on keeping. He didn't make it to church because of work, but we hope he will stick to that. In return, we promised to see him every day this week to keep him strong in that commitment.

Yesterday, we were supposed to have two investigators to take to cottage meeting. It all ended up falling through for one reason or another, so we had an evening very different from what we had planned. We had dinner at the Robinettes' home, a very faithful family in our ward. They are taking care of their niece and nephew, Kaylie and Scott, for the summer. These children are not members, but are interested in the Church, as they attend with the Robinettes every week. Since we had no evening commitments, we decided it was a perfect time to teach them about the Restoration. We did so, simply and powerfully, with the help of the Robinette family. Scott and Kaylie both committed to read the Book of Mormon with their cousins and pray about it. Though we didn't get to attend cottage meeting, we had the opportunity to find two new investigators and brush up on teaching simply!

We also met our new mission president this week. He is awesome! His name is Mark Everett Bonham! Isn't that funny? He told us Elder Holland started cracking up when he was getting ready to set President Bonham apart. He told us a few cool things. He wants to phase out backpacks (most missionaries are speculating that this means iPads! Haha.) and has also expressed to the general authorities that he wants our mission to be on the forefront of this whole technology-missionary work wave, so that's awesome. He said he's "not afraid of computers."

As far as we know, we're still set to go crabbing with Ryan this afternoon. We have permission, as we are only going out on a dock. So it should be cool!

One picture exhibits why Elder Benedict and I have the greatest ward mission leader ever. On Tuesday, Elder Benedict had a cavity taken care of. He was feeling woozy afterward and didn't feel like biking up the huge hill to get to Brother Jarvis' house, where we had dinner scheduled. But, since the Jarvis' just moved there, we've been dying to ride down the hill for the adrenaline rush (We're 19-year-old boys. What can we say?). So Brother Jarvis came to our apartment, loaded our bikes into his van and drove us all the way up to his house. After dinner, we rode our bikes to the Hemmings, who live directly at the bottom of the hill from the Jarvis'. Perfect! Basically, we melted our faces and had a blast.

The other picture is of me with Derek. Such a great dude! 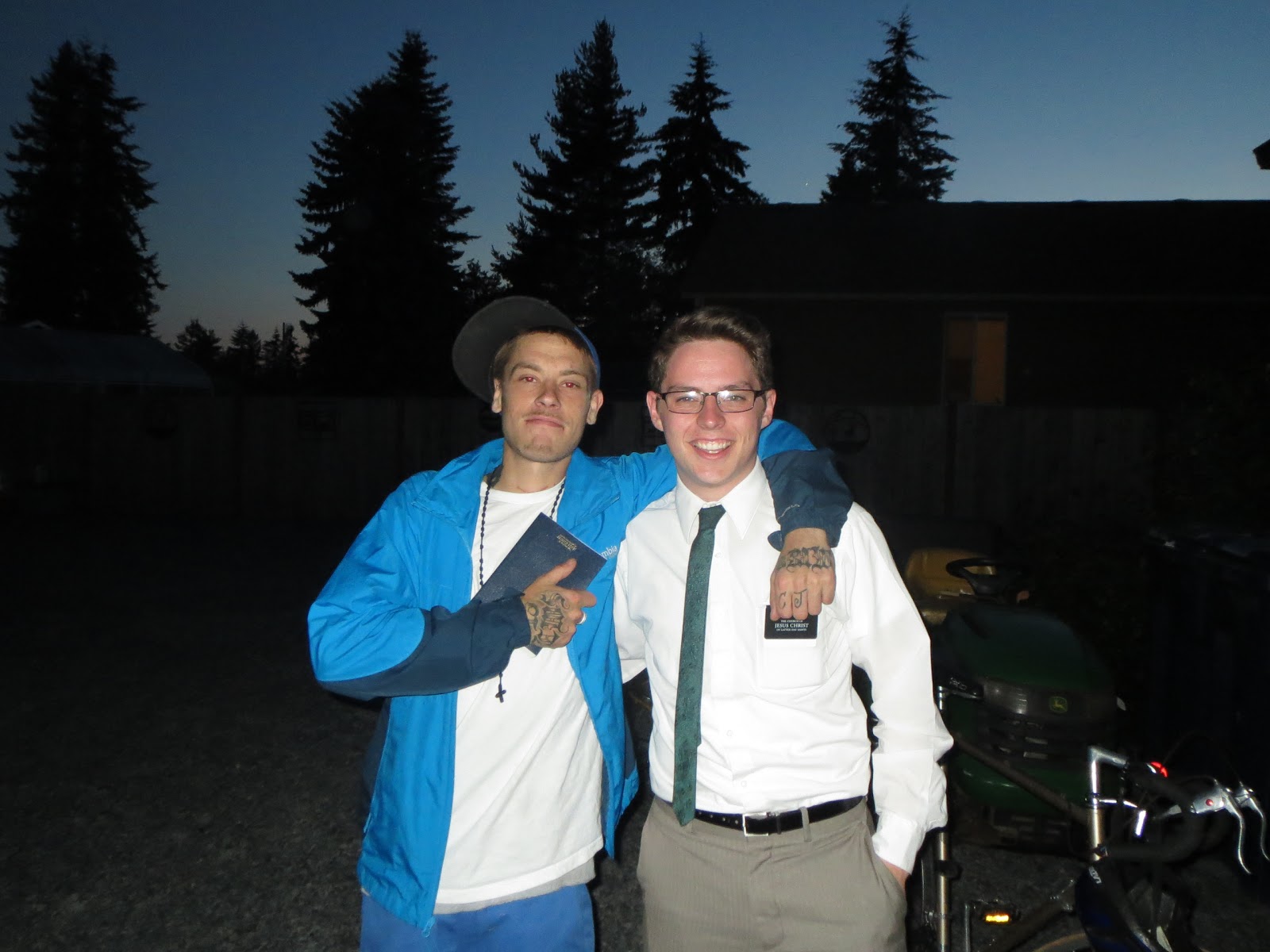