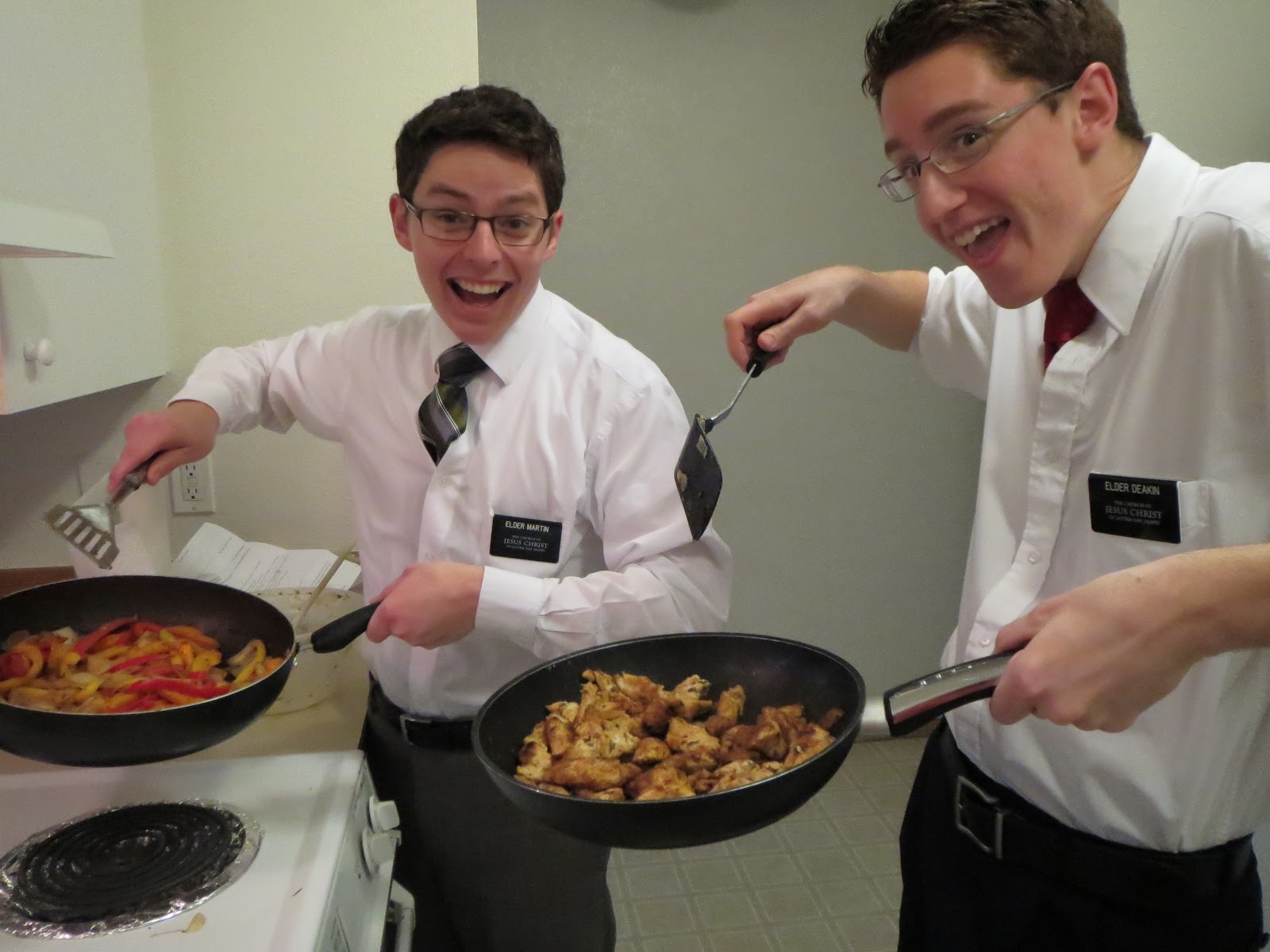 Thanks for the recipe, we'll get right on dem fajitas today! Mom, I
think we'll also be stopping by Best Buy, so I'll get something there.
I still have plenty of travel cash that I think I'll use. It's about
$160, so I'll use that as the limit.

The text was from our Relief Society President, Sister Jarvis, who had
us for dinner, not from our phone. So we're a
ll good! She has a son on
a mission and a daughter leaving soon, so she decided to send a fellow
missionary mom some love. :p Her husband is our Ward Mission Leader 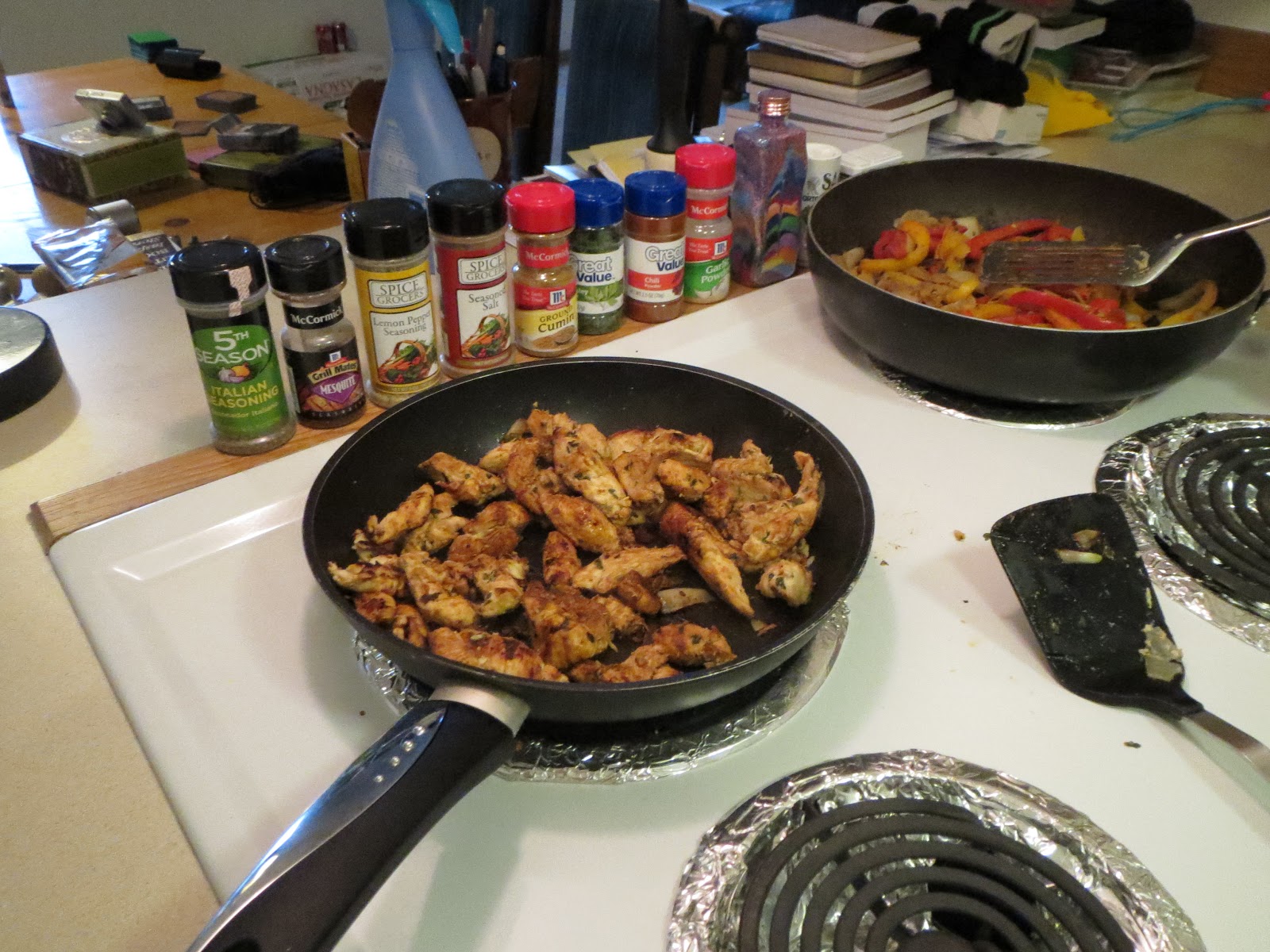 and is so, so involved! I'm grateful to have such an awesome WML.

This week has been a fantastic one.


Though one of our more committed investigators, Farlan, had to cancel
his appointment, we were able to have several other great lessons. We
taught Jordan Edwards, a 23 year-old young man living with a member,
about the Gospel of Jesus Christ last week and intended to show him a
helpful video about the Restoration this week. We quickly discovered
that he had already seen it, so we decided to read a few chapters of
the Book of Mormon with him and break them down so he could understand
the doctrine and feel the Spirit. What a miracle we witnessed! He was
feasting upon the words of Christ, expressing how wonderful the Book
of Mormon was. At the end of the lesson, we asked him to pray, and he
offered a beautiful prayer, by the end of which he was fighting back
tears. I was so grateful to witness such spiritual momentum working
inside him.

We also started with a new investigator this week, Bodee Davis. His
family are all members, though less active, and he turns nine in a few
days, so we're trying to get him ready to be baptized. We decided to
teach him a shorter lesson on the Restoration and include an object
lesson using a Rubik's cube (mixed up was the religious scene Joseph
Smith knew, then solved was the restored Church, same as it was before
being jumbled) to help him understand. We committed the whole family
to read the Book of Mormon together on a regular basis. 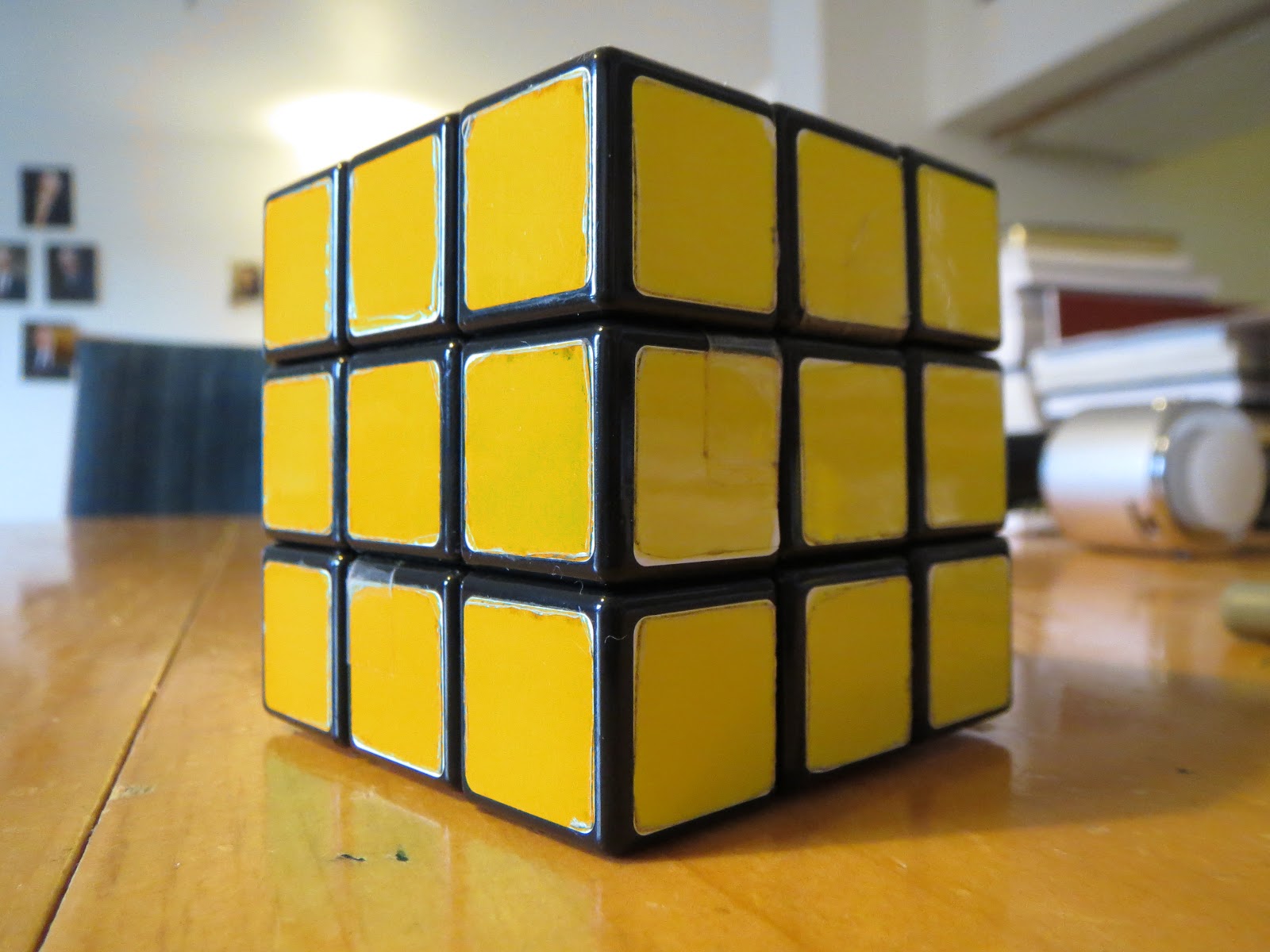 On a related note, Elder Deakin taught me how to solve a Rubik's cube!
But he's way quicker. His record is 58 seconds!

We also visited with a less active member, Kathy, whose life has been
a circus lately (refer to news article from previous email), with
trials abounding left and right. We read with her in Mosiah 4 to help
her understand how to become more like Christ, to obtain a remission
of sins, and to show charity.

In our Fifth Sunday meeting yesterday, Bishop Russell invited us to
read this month's Ensign and pay particular attention to an article on
the enabling power of the Atonement. As I read through, I was
especially impacted by a quote from Elder Holland:

"[This] may be one of the Savior’s commandments that is, even in the
hearts of otherwise faithful Latter-day Saints, almost universally
disobeyed; and yet I wonder whether our resistance to this invitation
could be any more grievous to the Lord’s merciful heart.” Elder
Holland added, “I am convinced that none of us can appreciate how
deeply it wounds the loving heart of the Savior of the world when he
finds that his people do not feel confident in his care or secure in
his hands."

So often, I feel like I don't trust enough in the Lord to take care of
me, especially when things get hard. I try to brave trials, even the
smaller ones, by myself. I can definitely improve here. I will "sue
for loving favor" more often and more sincerely. I want to be filled
with the love and spirit of Christ as we so often read about in the
Book of Mormon.

I'm really happy to hear about Seth's improvement. I love how he's
asking Amanda to prom! He's such a stud! Seth, your older brother
approves! I think it's pretty awesome that Steve is being a good sport
about it, too. That's hilarious!

Mom, you're doing great! Keep up the Wellness Coaching. I'm glad you
were able to have the Lord confirm to you His will for you. Now all
you have to do is work hard, and He will make up the difference!

Dad, thank you so much for your spiritual insight. I keep forgetting
that spiritual progression is a process and that I need to be patient
with the Lord. He is obviously very patient with me!!

One of Elder Deakin's recent converts, Derek, is going to the temple
soon. So we have special permission to go with and join him when he
receives his endowment. So we get to go more than twice this year!
We're cheating the system! Yeah! He is also being sealed at a later
date to his wife, who was already a member. Whoop! That's one reason I
really want to get another camera soon! :p

On that subject, I might just send the broken one home, and you can
see if it's not too expensive to fix. If not, extra camera!

Funny story of the week: 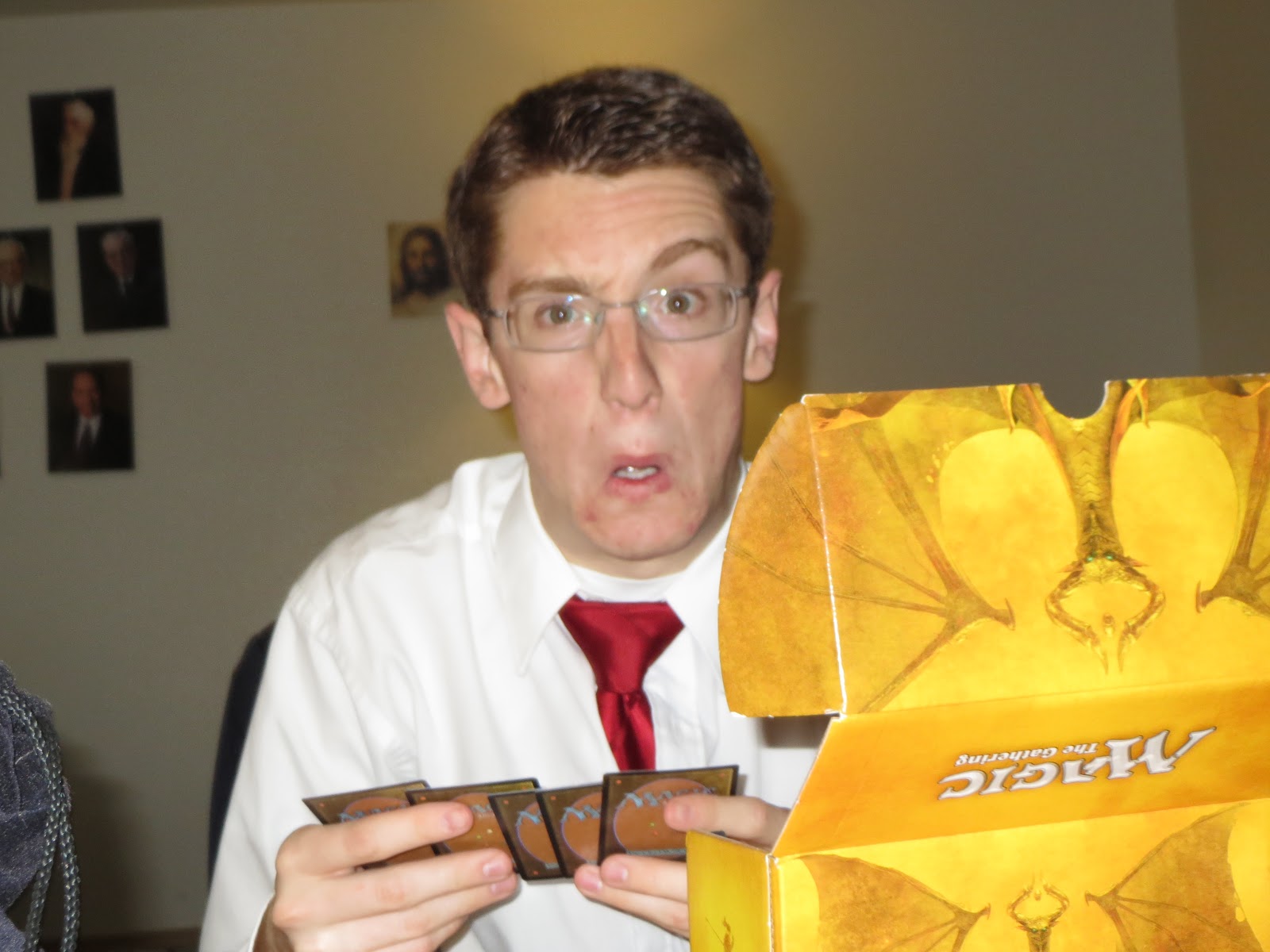 We were asked to help the bishop feed his alpacas this week because he
was down in Seattle for bishop-y stuff. So we went over to his house
with another member, Brother Sopi, to get the job done. Before getting
out of the car, Brother Sopi warned us that one of the alpacas was a
spitter. When I was filling up their water bucket, the alpacas kept
their distance. But one of them was very friendly, and showed a
particular interest in humans. She approached me, Brother Sopi's
advice clicked in my mind, and I had the foresight to back away before
she could hit me with her salivary spray. Fortunately, it was a light
attack. I made a mental note as to which alpaca was the perpetrator.
Later Elder Deakin and I were filling up their trough with alpaca food
and petting the soft pelts of the furry beasts. Whilst doing so, I
noticed in the corner of my eye a culprit silently approaching Elder
Deakin's left side - I was on his right. She sniffed at him and then
me and then back at him. My neck rigid and face to the front, I
whispered out of the side of my mouth, "Elder Deakin, she's here..."
He responded, "Who?" and turned to look. The timing was impeccable.
The alpaca let loose a cone-shaped shower of spit, aimed directly at
Elder Deakin's face. He had no time to react, and so the poor soul
endured the attack. I guffawed wildly like a ticklish toddler. He
wiped his glasses in defeated silence.

I love you all! I hope this week is a wonderful one for you! Keep
working hard and relying on the Lord. Y'all rock!