Sorry for the untimely response. Our library was closed yesterday for renovations or something, so we're emailing today.

The eye appointment went well. Dr. O'Malley said essentially that for now, I'm fine, but he wants to check up on me again in a year. That is, of course, unless something crazy goes down and I need to be seen right away. He did see the latticing that Dr. Hovis mentioned, and told me that it's seen in about 6-7% of the population, so it's not terribly rare, but still something to take note of. He attributed the odd phenomenon that I saw during ward council to random optic nerve firing just as one might experience a shooting pain in the arm though nothing is wrong.

I am really grateful for this week. District meeting on Wednesday was on finding. More specifically, it was on talking with everyone and extending an invitation to everyone to act. At the end, we rolled out this new daily goal for every companionship in the mission: contact 15 new people each day and invite them to do something. Simple, right? Well, it's actually sort of difficult, especially for me. I don't fancy tracting. But the way I saw it, you either make this goal important to you, and you go with it, or you don't. So I did. I have been making a more concerted effort to take pure finding activities seriously and faithfully. And let me tell you, it rocked my world! Now I'm excited to tract or street contact or whatever in order to reach our goal. I have this added push to talk with everyone which melts away the apprehension. Elder O'Rullian have now started setting aside about an hour or so every day to do pure finding activities. We call this our Daily Shenanigans!

One thing Elder Ballard said directly to the full-time missionaries was along the lines of, "If you want to teach more, talk with everyone." I guess that's a little obvious, but having come from an Apostle and not just the mission president, it was pretty motivating. So, we got right out after the session ended to conduct our Daily Shenanigans. In just about 30 minutes, which was all we had, we contacted 15 people! It was awesome! So many people were just outside doing yard work or whatever. At one point, I was very subtly prompted to knock on a random door we walked past, so we did. Jacob, a 14-year-old, answered, spoke with us for a bit, and accepted a copy of the Book of Mormon. On the final stretch of road back to our car, we had 13 contacts. With a prayer in my heart and faith that Heavenly Father would help us reach our goal, we walked confidently back. Four or so houses from our car, we heard the voices of two people conversing float down from a balcony far above. Boom! Reached our goal and went on our way!

On Wednesday, we taught a lady named Gilda, who joined the Church a loong time ago shortly after moving here from Costa Rica. She was inactive for quite a while until Elder Brockbank (now home in Provo) knocked on her door several months ago. She hadn't been to church literally "because [she knew] not where to find it". With some conversing, we found that she joined the Church originally because she liked the people and the warm feeling she got when she went. But that was about the depth of her testimony at the time, which is fine. But now she's preparing to receive her patriarchal blessing at the end of this month, so she wants to develop her spiritual conviction of the gospel. Thus, she's retaking the lessons from Elder O'Rullian and I. We taught her the first lesson a few weeks ago, and instead of moving to the second lesson right away, we felt inspired to read with her out of the Book of Mormon first. We started with the first chapter, doing round robin reading. In the middle of a verse, she lost composure and started crying, saying, "I don't know why I am crying. I just asked Heavenly Father in my heart to help me learn." It was so awesome!

We had a short lesson with John, the wealthy man, so he's now a new investigator. It went alright, but he didn't have a lot of time. I sense that his interest is cooling off, and he has other priorities. We have another appointment with him tomorrow, so we'll see how things go. We just need to figure out what about the restored Church is going to incite him to action.

If you remember the Arab family I mentioned before, we also went back there and gave the father a copy of The Family: A Proclamation to the World, as suggested by President Bonham. That was sort of nerve-wracking because, well, he had asked us not to come back. Regardless, he was still just as gracious as the first time we met and sincerely thanked us for the document, as well as for "running around in the cold, doing 'this'".

We saw the Copenhaver family on Sunday following the afternoon session of Conference and taught Josh and Justin (twin unbaptized children) about baptism. They agreed to be baptized on November 23 and understand this will mean steady church attendance and scripture study. Sister Copenhaver understands this will require a lot of help on her end.

Transfers are today. Both Elder O'Rullian and I are staying here in Seattle Hill. Elder Larson (of Thomas Lake, one of the areas in my district) is leaving, however, as he has been called to be a district leader elsewhere! Yay! He can really use this opportunity to grow. He's definitely the leader type. 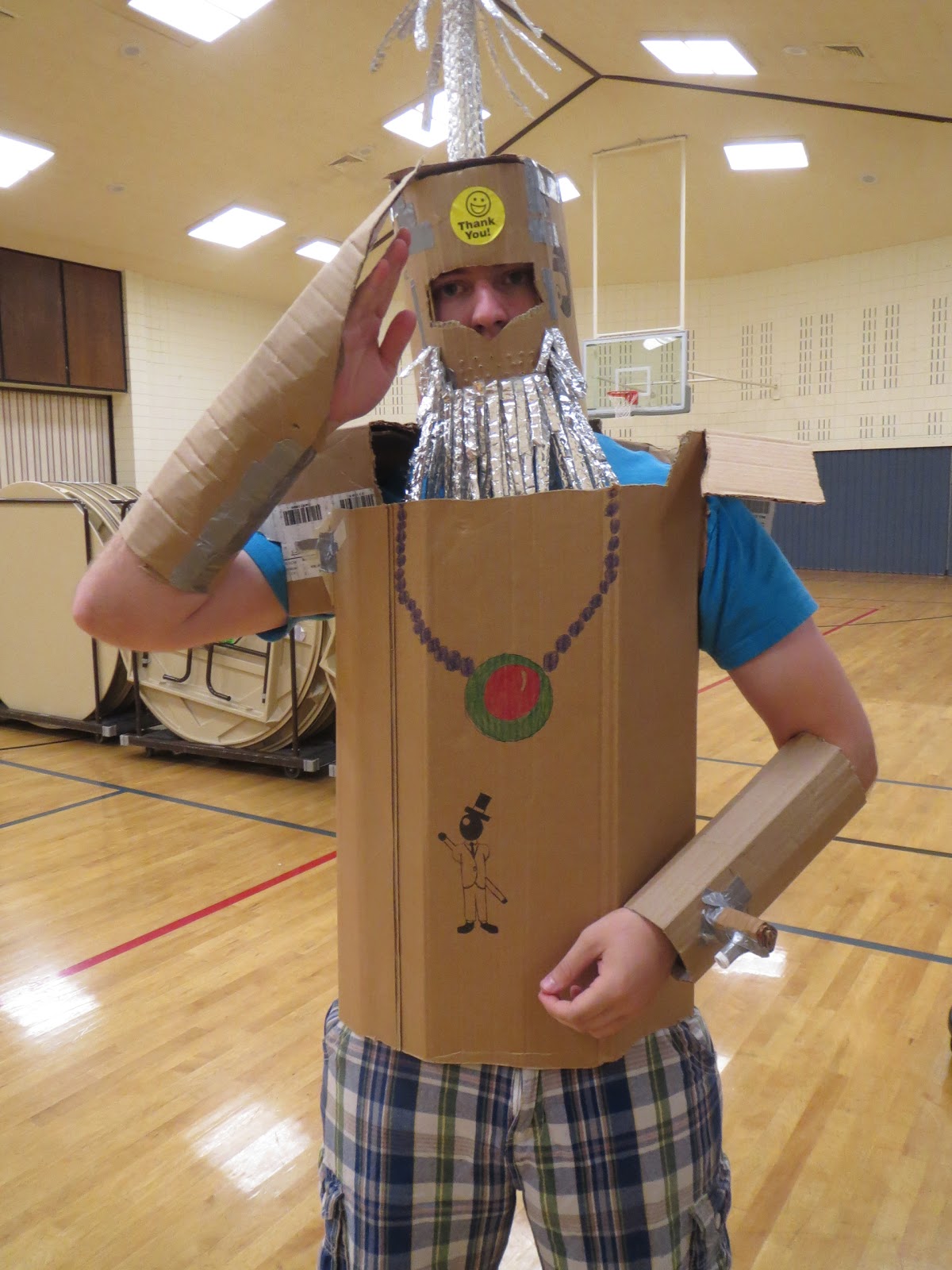 Speaking of Elder Larson, we went jousting for p-day last week. Yes, jousting. Elder Larson is the one in the suit of armor, and his companion, Elder Black, is the other one in the [sort-of] suit of more box-like armor. Elder O'Rullian and I decided to go golfing instead of make armor out of cardboard, so our protection consisted of pillows, bike helmets, and duct tape. Our trusty steeds were roller carts (often found beneath the giant industrial trash cans used in most church buildings) powered by our companions. The lances consisted of a PVC pipe, a Nerf football, and more duct tape. We had a blast.

I think that's about all for this week. 'Twas a good one. Elder O'Rullian and I are definitely excited to work together for another transfer. Should be good! 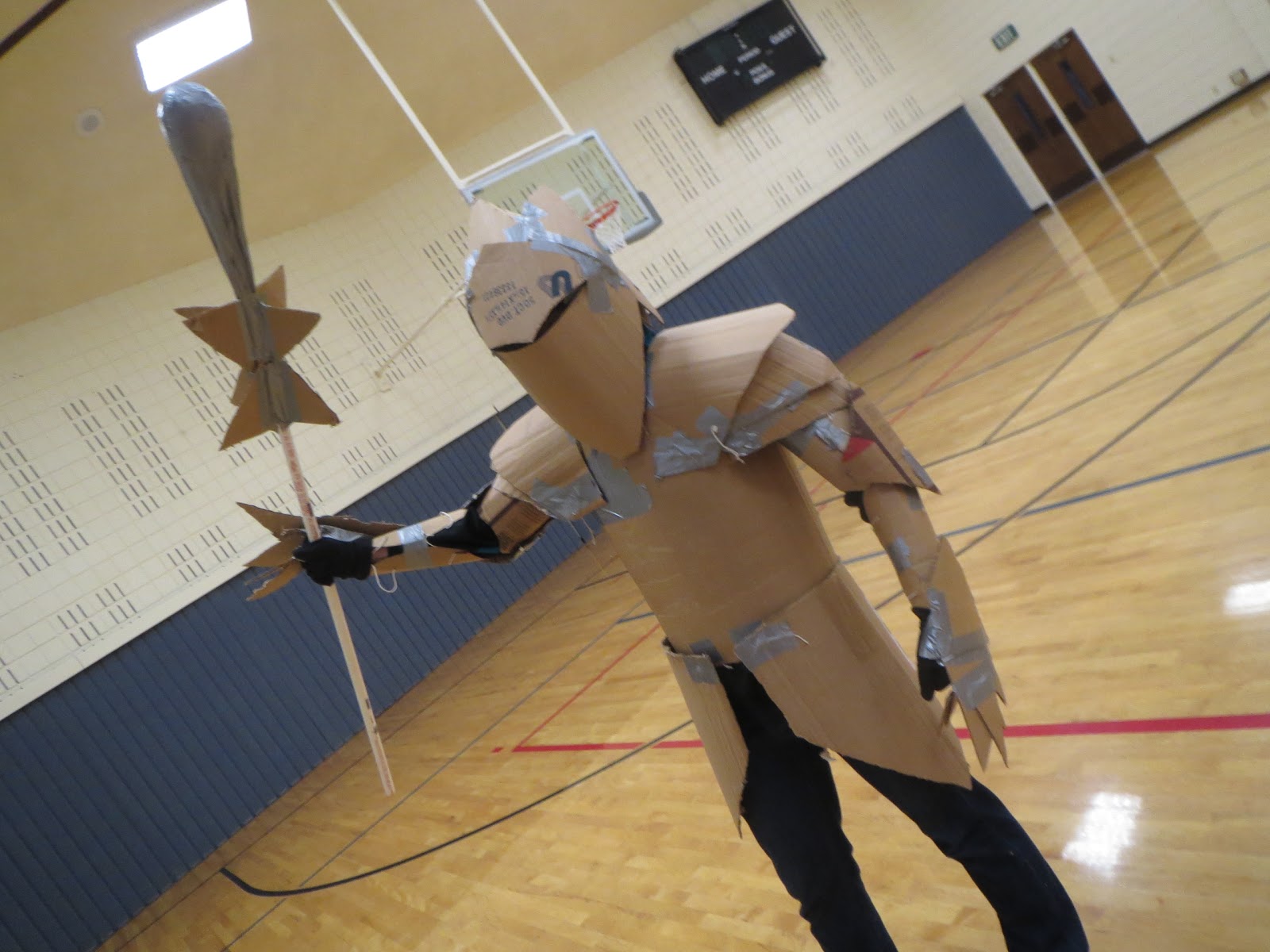 Thanks for y'all's comments and stories and whatnot. Mom, your political comments make me chuckle. It's weird to hear about that since we're so out of touch with news and stuff. I did hear about the government shutdown a few times. Whatever, man. :p I'm glad Brandon's doing well. I still pray for y'all, especially Seth and Christian and Margo. A testimony is so important! And I'm grateful that y'all are setting an example of member-missionary work in the ward at home. Keep it up!