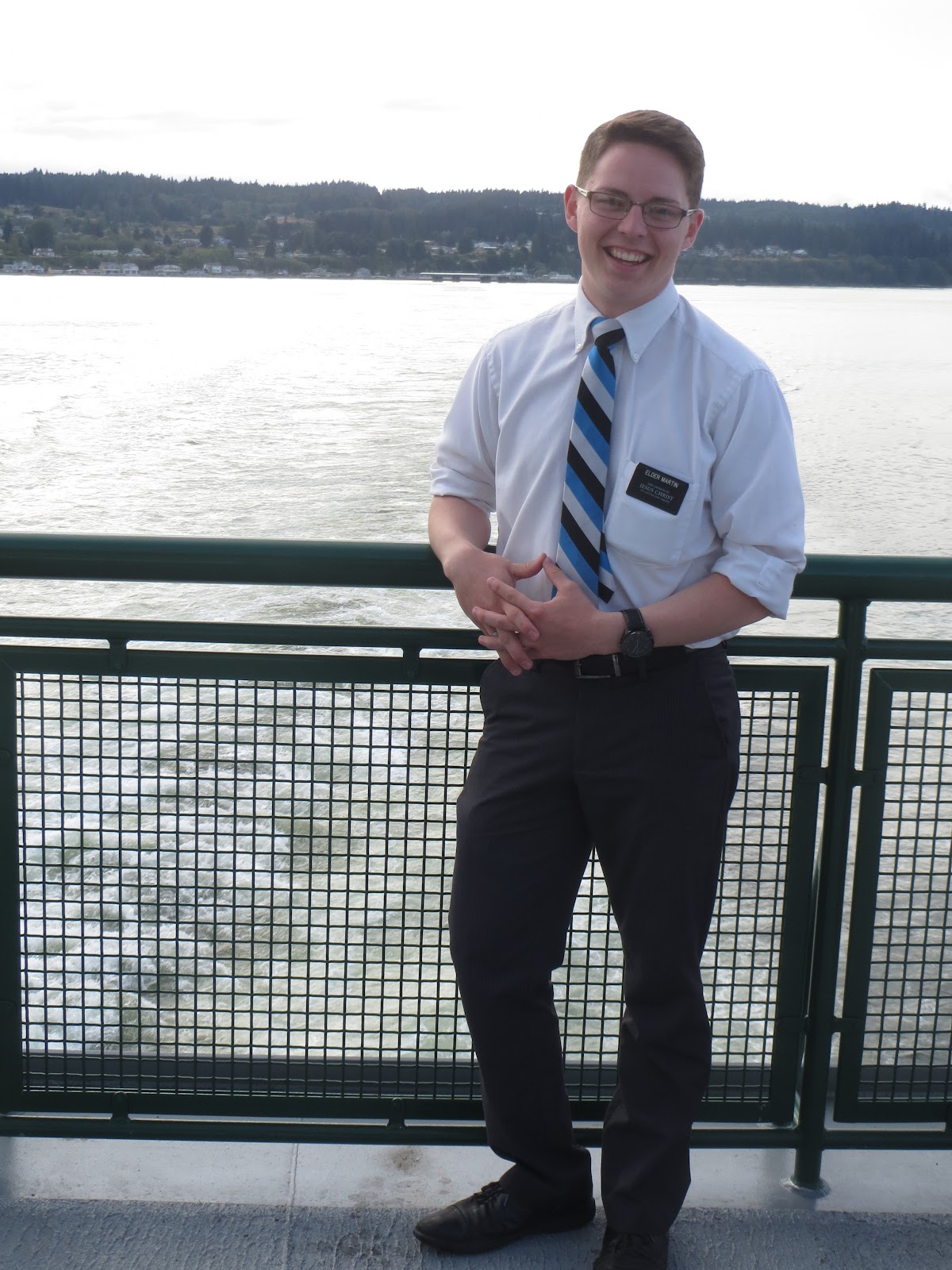 Man, I tell ya, it's crazy how the adversary works on you at the end of your mission. Every day, there is temptation to let up, temptation to give in. The way I see it, a month is still a long time (at least it was when I was in high school) and I still have plenty of work to do! So I'm hangin' in there and striving to improve on everything I can because it helps to keep me focused.

We taught Susan and Wayne this last week. This is super exciting because at first, only Susan was interested and learning, but then she invited her husband to join, and so he did! Wayne is a tired man who has worked hard all his life and done the best he could for his family. Unfortunately, he had a daughter fall into serious drug addiction, and he had to turn her away from his home to "show her tough love" as he described it. Then a thought jolted into my mind! The "tough love" he described is the same "tough love" Heavenly Father has had to show during every period of apostasy since the beginning of the world! This is especially true for the Great Apostasy. God's children refused to listen to the prophets he called to declare His word, and so He had to show tough love by taking the gospel and the priesthood from the earth until His children were again humble and prepared to receive it. We explained this parallel to Wayne, and it seemed to really click for him. He has great questions about the Book of Mormon and the Restoration, so we spent some time answering some of those, but didn't get through everything. One of the most frustrating things about being a missionary is wanting to answer a person's every question all at once, but there isn't time for that! On top of that, they learn more when they prayerfully seek answers on their own from the scriptures and from the Holy Ghost. So we invited them to finish reading the Restoration pamphlet together before we go to teach them tonight about the Book of Mormon. I love teaching families!

A lady named Angel has regularly invited us to her home because she is interested to learn more, but sort of has her own church that she attends. In recent weeks, she has become more sincere about reading the Book of Mormon and praying to know that it is true. This last week, however, she "confessed" to us that she had explored a ton of anti-Mormon stuff on the Internet. She invited us over to help her understand what she had read and discern what was true because she was questioning everything we'd taught her. Well, we went and with a prayer in our hearts, did our best to help her see and understand our purpose as missionaries and how she can receive revelation from God. She set up her laptop in her office and started reading to us all this junk she'd read and, let me tell you, the Spirit was gone so fast. I was getting so frustrated (in a Christlike sort of way) and we had to cut her off. Elder Cottle asked how long she'd spent studying the Bible to know if it was true. She said it had to have been many, many hours. He then asked how long she'd spent in the Book of Mormon. Maybe an hour. How long on these websites? Two or three hours. I told her that she wasn't giving herself and her family a fair chance. She was, in a sense, damning her progress and her ability to recognize the truth by poisoning her mind and heart with all of this codswallop. She was allowing Satan to disallow her and her family the blessing of being together forever, and she didn't even know it! We urged her -- and we were bold -- (with love, Alma 38:12) to look for God, to look for His word, to ask Him what the truth was. And so she did. She prayed right there. And before doing so, she made the most marvelously symbolic gesture: she turned around, closed her laptop, turned back to us, and bowed her head in prayer. And she offered the sweetest, most sincere prayer, asking God what the truth is. The Spirit was so strong! In a short period of reflection after the prayer, she felt God telling her in her heart, "Keep studying. Keep seeking. Keep reading my word." In response, I pointed to her laptop and declared, "That is not His word," and she concurred. She committed to read the Book of Mormon and the Bible together and to seek God's confirmation of truth through the Holy Ghost. Man, I love being a missionary.

So, Snohomish High School is really big on wrestling and there are a few kids in the ward that perform really well at every tournament. Reminds me of Seth all the time.

I finally finished my "trunky papers" as they call 'em here in the mission. They are the essays President Bonham asked me to write about my mission, what I've learned, and what I plan to do after I return home. Came out to 21 pages, hand-written. I'll ask Mom and Dad to read it when I get home, and I think I'll send a copy of it to Christian. It's interesting to reflect on all that I've learned and the ways in which I've grown, and also the things I still have a long way to go on. Mostly, I get really sad when I think about it, so I'll stop now.

Jill texted us this week and told us that she's moving back to Kirkland! It was kind of a bummer, but she has a ton of mold problems in her apartment right now, so it makes more sense for her health and safety to move. But! I'm not too worried about it because when I think about it, she moved from Kirkland to Snohomish for a very short period of time. We were able to find and teach her and get her started on the restored gospel and help her have some incredible spiritual experiences. Now she's headed back to Kirkland with an aroused seed of faith and a desire to keep learning from missionaries down there. I'm ok with that. I'm just glad I got to help.

John is one of those investigators who has investigated for a long time. Probably 6 to 9 months now. He is getting so close, but it seems he is waiting for a lightning bolt-esque answer from God that he needs to be baptized. He knows that his baptism as an infant isn't valid and believes strongly that baptism should be his personal choice. He has recognized a dramatic increase in the quality of his life and an improvement in his relationships with all others since meeting with the missionaries and attending church regularly. However, we discovered this week that he doesn't understand clearly as much of the doctrine as missionaries seem to have thought he did in the past several months, or as much as one might expect after investigating for a while. We decided to really go slow and re-teach him the lessons while checking frequently for understanding. Now, he told us, he understands the importance and gravity of the connection between ancient prophets, Joseph Smith, and Thomas S. Monson, and he has almost a thirst to learn about and comprehend more fully this fundamental concept. Progress, progress! The ward council is going to fast next week for him and for Colleen, our other investigator who refuses baptism on the basis of Mersa and its contagious nature, but seems to have more deeply rooted spiritual concerns that she's not yet willing to unveil.

We actually have a pretty large teaching pool right now. It's one of the largest of my time as a missionary. But all of these people we teach are having a hard time getting over some hump that keeps them from coming to church or accepting a baptismal date. I get the feeling that we need to rely a little more on the Lord to do His work because a lot of what we face seems to be beyond our control...

I really want to take a picture of Elder Cottle and I and send it to you all, but I simply keep forgetting. And my camera is back at the apartment. Sorry... But I promise he really is 6' 6"! [link to Elder Cottle's blog]

All for now, folks! I love you all!