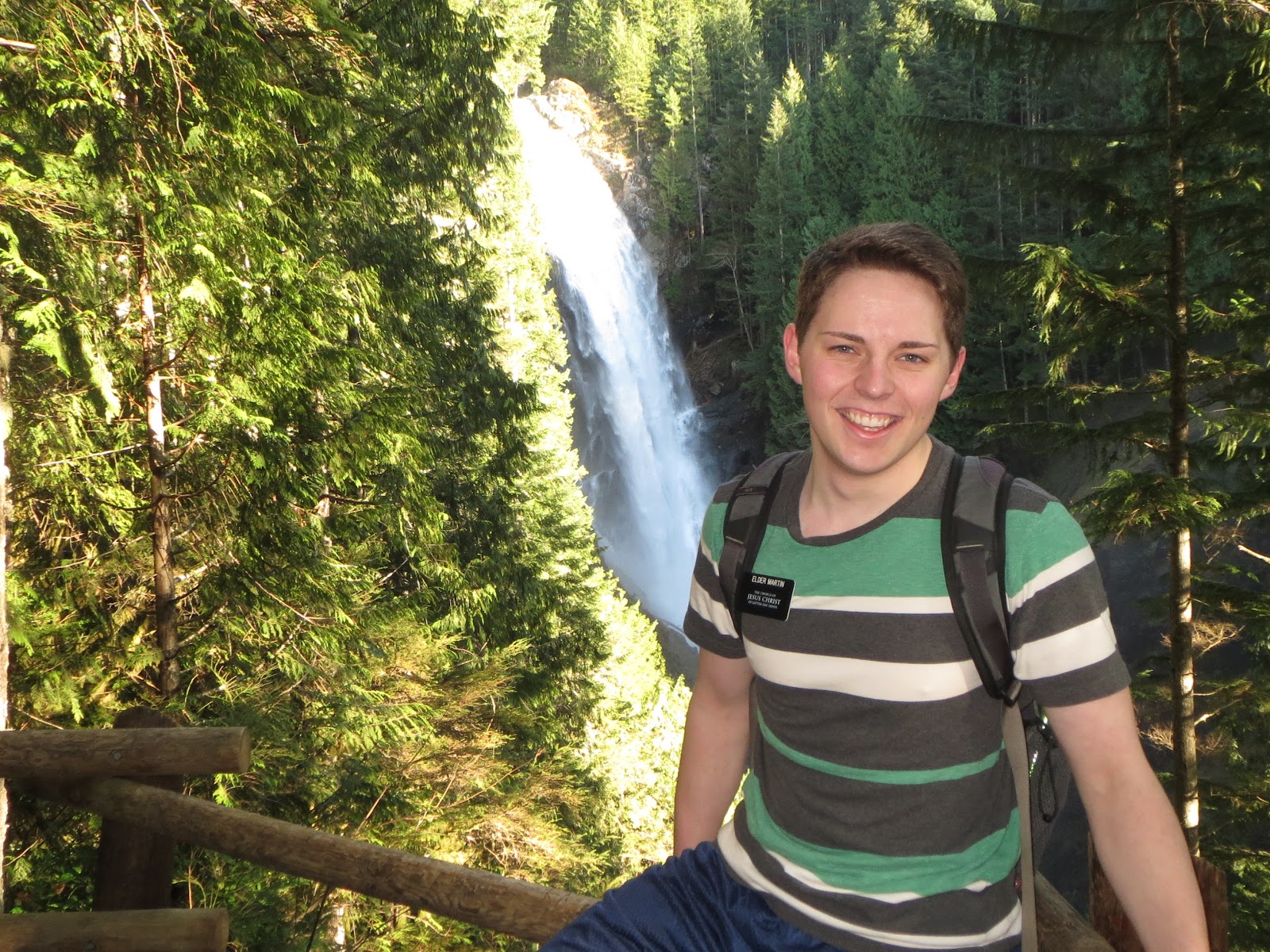 This week was...interesting. We had a lot of people misuse their agency this week. Darn the luck.

But there were some cool experiences too. We were tracting one street in Snohomish that we started the first night Elder Cottle was here. We knocked a door, the lady who answered wasn't interested in talking even after a few invitations, so we asked her if she knew anyone else on the street that might be interested. She responded that she didn't, and then her 8 year-daughter, whom she was holding, piped up, "I do!" and pointed us to the house on the corner across the street. So we went and knocked it, and the lady who answered ended up being a long-time friend of a recent convert in the ward. Her friend had been inviting her to come to church for a long time now, we taught her about the Restoration of the Church of Jesus Christ, and she invited us back!

Get this: on Monday, we received a phone call from a member of the ward who said she had a possible investigator for us. She decided to pray for an opportunity to share her testimony with someone, and then she met Gail the next day! Gail recently suffered the immense loss of her son and has been grieving deeply. So Sister Fricke (the member of our ward) took the opportunity to bear her testimony about eternal families and God's plan for us. Gail expressed interest in learning more about our faith and gave Sister Fricke her address. Well, we went to the house, and what do you know, but it's a house that Elder George and I tracted almost two months ago! When we knocked the first time, her [other] son answered and was kind, but made it clear he wasn't interested. We probably would never have gone back (at least not until other missionaries were transferred into the area). But because of the wonders of member missionary work, we've been referred to someone who is prepared to receive the gospel! Gail wasn't home when we went over this past week, so we will try again tomorrow, but we need you all to pray that she will be prepared and that her heart will still be softened by the Holy Ghost so that we can begin teaching her and help her come unto Christ. She needs the comfort and hope that the Plan of Salvation brings.

On another day this week, we spent about twenty minutes looking for a less-active's house in the dark and in the rain and in the mud along a very busy highway. When we finally found the house after trudging through a field or two in ankle-deep mud, we knocked and were met with a man who was super creeped out (it was only 7:45 pm) that we came knocking so late, down his long, muddy driveway. Though he brandished a machete as he spoke with us, he was very friendly. He told us the lady we sought did not live there and asked us not to come back. He didn't even want to hear what we had to say about God calling a prophet on the earth today...

On Thursday night, we had a sweet pass-off lesson with Frank. He is 27, so we decided he would get better fellowship in the young single adult ward. We called up the Silver Lake elders and scheduled an appointment to meet up with them and Frank. The lesson went wonderfully. Elder Green, who replaced me as Elder Foster's companion, seemed to make a really strong, warm connection with Frank right off. We all read the Book of Mormon together and pointed out to Frank all the marvelous insights that can be learned. He is excited to keep learning and reading and praying and to attend church (well, hopefully, he attended the YSA ward yesterday!). We asked why he decided to start meeting with us. He explained that missionaries have come knocking for years and years, and he has always turned them away in indifferent disinterest. Well, he said that when Elder George and I knocked on his door, he felt, "Why not just give 'em a chance and listen to what they have to say?" and invited us back. Now, he's doing great and his life is changing! As President Bonham would say, we were the "nineteenth person[s] at the bus stop"!

Yesterday, we went with Brother Schwartz to pick up our investigator, Elijah, to come to church with us. Well, we got there, knocked, he climbed out of his trailer in a nice dress shirt and slacks, with his hair slicked back all nice, and I couldn't help but grin at him! He was so excited to come to church! Get this: he told us he wasn't coming to church. I was so confused. Not twenty-four hours earlier, he committed with a firm "I'll do it." that he would give church a try. To confuse us more, he explained that he had been up all of the previous night and that morning reading the Book of Mormon through the middle of the Book of Alma. He decided that "there is absolutely nothing for me to gain by going to church with you". Heartbreaker. He was kind and cordial, but he was firm. The three of us had hard time understanding his concern, and after mulling it over some more, Elder Cottle and I decided that he really did want to come to church -- badly, I bet --, but his wife prohibited him. She has always been sour toward us and she seems to have a good amount of pull on his decisions. We will try back soon, but he seems to want a break from having to "choose" between us and her. If only she would listen to our message too, that would solve all our problems!

Colleen, our 75 year-old investigator, attended sacrament meeting yesterday, and then about five minutes of Sunday school before taking offense at something someone said (the source is still largely unknown) and storming out. She insisted on walking home -- about 3 miles in the rain on a busy street. The young women's president convinced Colleen to let her drive her home and they talked a little on the way. What we learned is that since Colleen fell last week, she has felt distrusted and even "spied on" by all the members of the ward who have stopped in to help with chores or drop off dinner. She described feeling severely depressed and even suicidal. Though she does face immense medical issues and the imminent reality of death -- and I can't imagine how sick of it she must be --, she also appears to be, well, mentally unhealthy. We try so hard to help her, but I find myself frustrated and feeling that there is nothing I can do to help. And then it occurred to me that the help has to come from the Savior. And she has to ask His help in. I just don't know if that will happen before it's too late.

Susan wanted to so badly to attend church yesterday, but Wayne, her sort-of husband, seemed to purposefully lollygag in Everett so that they -- or at least she -- couldn't make it in time. That's how she described it anyway. We will meet with them again tomorrow night.

Ah, what a week. Just gotta do your best to invite!

PS: Oh, and I found out today that one of my recent converts is going to be sealed to her husband in Utah this spring! Stoked!
Posted by Unknown at 9:17 PM