I don't have a whole lot of time today. At all. It's not p-day, as our p-day has been moved to Thursday (makes sense). But we're allowed to take some time to email today and ensure our loved ones that we are indeed still living.

So when President asked if I was ready to go North, he meant it. My new area is in Blaine, Washington. I am literally as far North as anyone can go in the mission, and probably even in the Western United States. I will attach a picture of myself standing steps from the United States-Canadian border (I got too close, set off some sort of detector, and a border patrol officer arrived within minutes to sniff it out).

It has recently gotten pretty cold, at least for a Texan. I don't know if that's because I moved two hours North of where I was in Everett, or if the whole state has seen this change in weather, but what I do know is that I am immensely grateful that Mom bought me a set of long johns and made me take them. They are so awesome.

My new companion is Elder Lovell from Delta, Utah. We are the zone leaders for the Ferndale Zone which makes up half of the Bellingham, Washington Stake. So far we've had a blast. When I got here, they split the Blaine Ward into two proselyting areas, so we're now sharing with sister missionaries, one of whom is fresh from the MTC. Most of the investigators and less-active members that Elder Lovell was working with last transfer ended up in the sisters' area, so that was sort of a bummer. But since I arrived here, I have felt my faith that Heavenly Father has prepared many people to receive us go way up. So I'm not worried at all. And that faith has resulted in a witness so far. We've met and talked with a lot of people this past week who are genuinely interested and have invited us back.

This weekend, we had the privilege to hear from Elder Bednar. That was so, so awesome. I think one of the biggest things that impacted me was how Elder Bednar taught us that when we do anything in preaching the gospel with the intention of benefiting or drawing attention to ourselves, it is a form of priestcraft and calls for hasty repentance. Sometimes, I feel like I am way too prideful, way too interested in the way I look, or way too concerned with how hard a time I am having. I need to forget myself and concern myself with allowing others the option of coming unto Christ and receiving the same saving ordinances I have received. Like, seriously, get over yourself!

Other cool (and super helpful) insights from Elder Bednar (and the Spirit) include: I need the joy of the gospel in my countenance (smile more [This one has already proven successful]). Revelation is a conclusion, not an explanation. "Baptism of fire" is not necessarily confirmation for the gift of the Holy Ghost, but the revelatory experience that comes after "baptism of water"/confirmation, letting you know that what you're doing is right. The power of godliness (remission of sins) is manifest in priesthood ordinances. Thus, forgiveness of sins is only found in baptism and confirmation by proper authority. Control is an illusion of the natural man; God is in control. A marriage is not something you find or fall into -- it is something you create. After all, God did not just find the universe or this solar system or this planet. He created them. To "challenge" is a business tactic. We must invite, persuade, and entice to do good. The Proximity Principle consists of this: revelation comes more readily and recognizable while in the setting it is related to. When you're not feeling it, do missionary work anyway and you will begin to feel it, for just as thoughts can precede actions, so actions can precede thoughts.

At the end, he invoked a blessing upon us in which he promised us success according to our desire and diligence. That definitely stood out. I have the desire. I just need to be diligent. Elder Bednar, I'm takin' that one to heart. It's time to hit it!

Having been transferred to Blaine, I'm kind of lucky. You see, Elder Bednar decided to speak to the Bellingham, Washington Stake yesterday morning as well. So we got a double-dose!

Not much time left. I love y'all!

I will pray for the Webbs.

[The pic of Elder Lovell and I, we are] squinting because THE SUN IS OUT TODAY. We've had about a week straight of fantastic weather. In the winter in Washington, that's unheard of. But I ain't complainin'.

Also attached is a picture just for Dad. A Rolls Royce just chillin' at the local Chevron in Blaine. Cool. 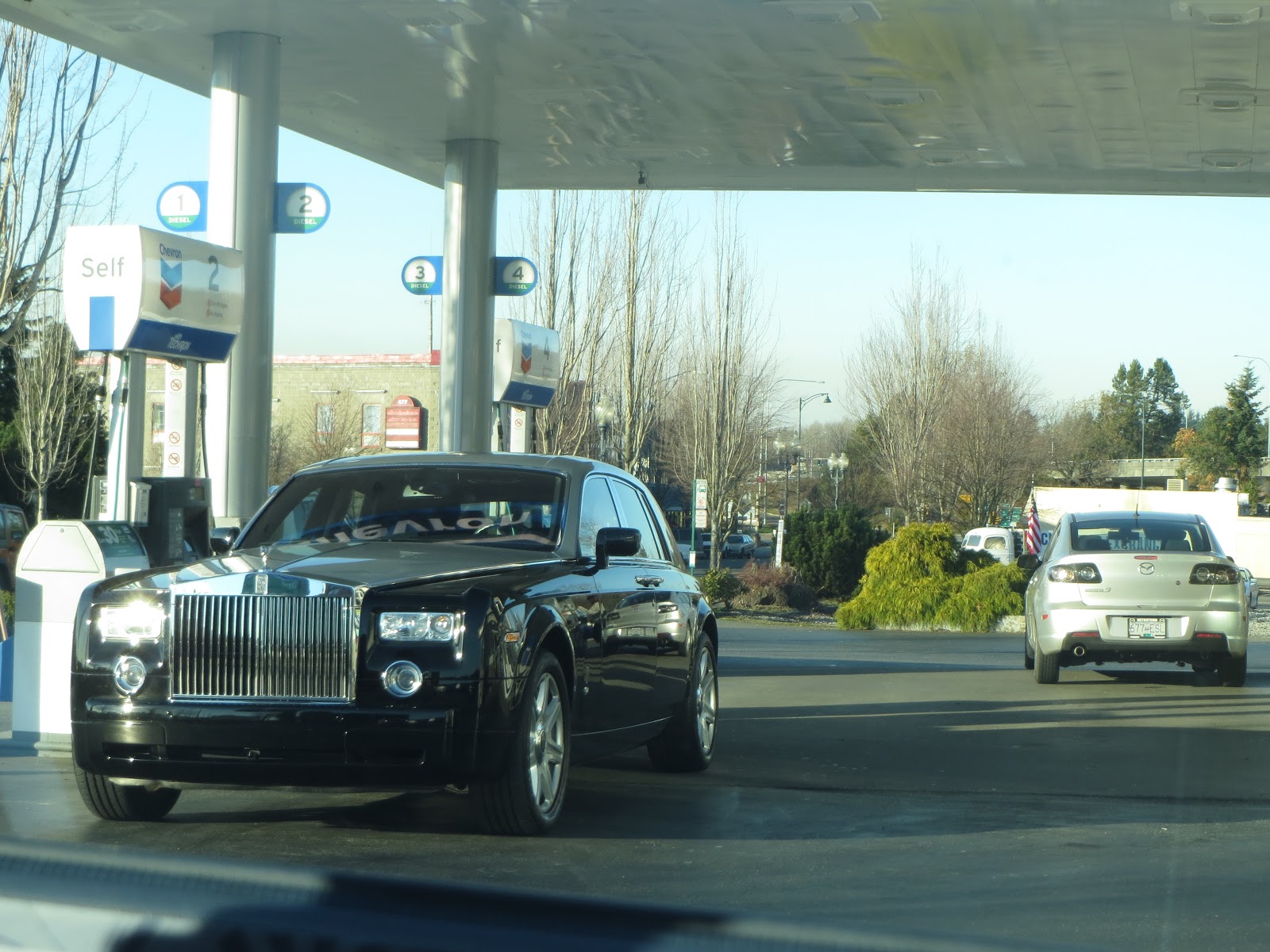